While he had a great love of Genoa,
Picasso was truly a “world citizen.” 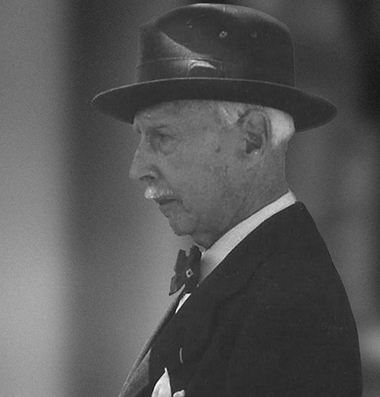 "The Man in The Street"

Renzo Giovanni Battista Picasso was born on November 11, 1880 in Genoa, Italy. The son of Ing. Severino Picasso, he grew up in the world of architecture and urban planning. His father co-authored the designs for Via XX Settembre in their home city, and his grandfather, Gian Battista Picasso, constructed the barracks for Genoa’s famous lighthouse. This no doubt contributed to Picasso’s great sense of Genoese pride that inspired him as an engineer, architect, and designer.

While he had a great love of Genoa, Picasso was truly a “world citizen.” He spent much of his time traveling and exploring the great cities of Europe and America. Upon visiting New York City in 1911, he was deeply impressed by the urbanism and technical innovation of modern American architecture. Deviating from the more conservative styles of his father and grandfather, he produced a large number of visionary drawings and plans depicting the most striking aspects of what he saw, such as skyscrapers, elevators, public transports, and urban plans. His affinity for the vertical nature of cities like NYC, as well as the complex transit systems, inspired him to conceive of similar plans for his birthplace, Genoa. His collection contains a multitude of inventive ideas for the port city, including a seaside tower and an underground metro to alleviate traffic issues.
He also had a keen interest in the similarities between major cities. He drew several architectural comparisons of various urban elements between cities like Chicago, New York, London, and many more. Most of his comparisons also included Genoa because Picasso saw the port city as a growing, urban center that served as a connecting place for people from all over the world, similar to New York.

Renzo Picasso passed away on January 28, 1975, and the majority of his work remained unpublished and unexposed. While he is responsible for some of the buildings that currently stand in Genoa, his grander ideas remain only in their printed form.
The Renzo Picasso Archive is currently working to gather and restore Picasso’s works from various locations across Genoa, Milan, and parts of France. To learn more about the founding of the archive, visit The Archive section.